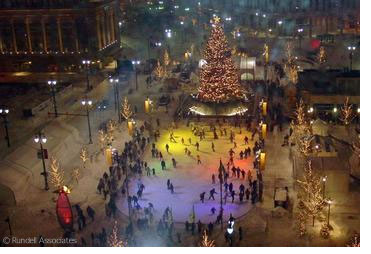 Detroit is not only known for cars, but also for the mass exodus of people from its downtown, and it’s still bleeding. However, a focus on creating a masterfully crafted public square in the very center of the City may start the healing.

With the help of a $20-25M grant raised by a civic organization formed to celebrate the city’s 300th anniversary in 2001, former Mayor Dennis Archer set a goal of creating the best public space in the world – City leaders, are you listening out there? $8 million came from the Detroit 300 Conservancy as a 300th birthday gift to the city, another $8 million collectively from Compuware and Ford, with the balance covered by the City of Detroit. Out of a massive, confusing, and dangerous intersection of auto-clogging arterials has risen the highly-acclaimed public square, Campus Martius, which has indeed become the lifeblood for festivities in the city, including 200 events in the summer (outdoor movies, concerts) and a hit ice skating rink in the winter.

It’s hard to argue with its economic impact either. Compuware moved its headquarters along with 4000 employees (that’s right, 4000) to a new building fronting the square. Notes Bob Gregory, who oversaw the square’s planning, “Compuware would not have come downtown without the park. They didn’t want just a building. They wanted a lively district, where their workers would have things to do.” City leaders, are you listening out there?

Know of any other such destinations? Would you want to work near such a place in your town?