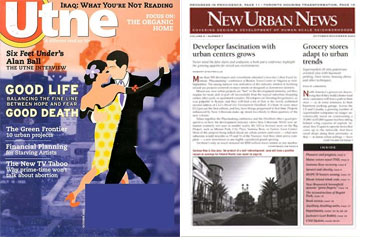 As you may know, the target audience for cooltowns can be classified as the creative class, early adopters, cultural creatives, entrepreneurs, bohemians, progressives, influencers… an alternative to the mainstream. Utne Magazine is the quintessential alternative publication, and thus it’s worth noting that their 2005 Independent Press Award for newsletters goes to New Urban News, the leading publication for developing walkable communities, a major component of cooltowns.

Utne’s description of New Urban News: “As big-box, car-dependent developments gobble up the landscape, this comprehensive newsletter equips readers with enough know-how to fight for (and create) responsible, walkable communities.”

It’s also a good reminder that cooltowns aren’t for everybody – it is alternative, after all. But then again, there’s certainly no shame in being included in that aforementioned target audience either.