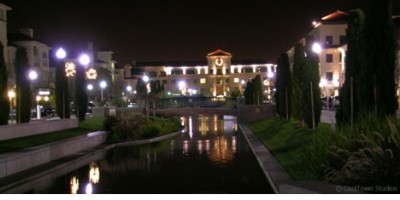 Of course, the more expensive/unaffordable a place becomes, the less of a destination it becomes for more people as well.

Bay Meadows in San Mateo, CA is lauded by nonprofits (including the Sierra Club) for its smart growth principles of compact, pedestrian-oriented, mixed-use planning with public spaces, and rightfully so. However, like at Santana Row a little south of it, the average homebuyer will need to be making well above $100,000 to live in one of its 734 homes. Nearly all the office space is occupied by one mutual funds company with over 1200 employees. The 100,000 s.f. of stores are also predominantly high end national chains, not what you’d call leading candidates for third places, and the grand public space (pictured) is beautiful, but not very usable. At least it has movie theaters, which can’t mark up their prices a whole lot.

Again though, as with Santana Row, it provides a viable urban alternative for the same target market that was otherwise driving demand for sprawl development, and that’s a very good thing, but a bit too corporate for the more creative side of the population, if that’s so desired.