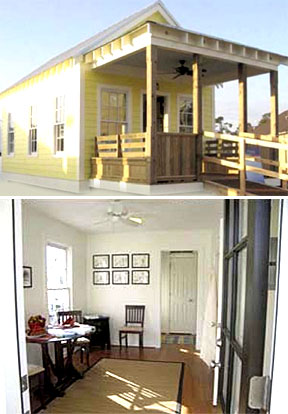 How can one afford own their own home and live in the most desirable neighborhood (ie expensive) without making anywhere near the requisite $100K/year?

Granted, this is for housing in Katrina-ravaged neighborhoods, but what’s interesting is that once people experience the home ‘in person’, they found it a lot more appealing than they’d expect…

“As soon as the Cottage was set up and the people arrived, it instantly became the favorite gathering spot at the entire show. People came early and stayed late… as a matter of fact, people reportedly stayed on the porch well past midnight every night of the show.”

Also, a friend of mine hosted a Superbowl party for 25 people in his 500 s.f. apartment located in the heart of Washington DC and everyone had a great time – at least from my point of view, aside from Seahawks fans.

The point is, one doesn’t need a big home (or even an average-sized home) to be able to live large, especially if it’s in the hottest neighborhood in the city.