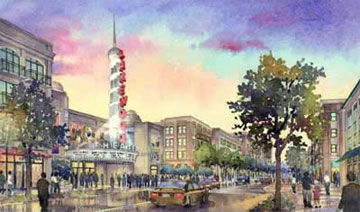 While the Belmar development profiled yesterday is a great example of mixed-use development (albeit not one for the creative class), it also deserves kudos for its green building, as covered in this month’s New Urban News.

Pedestrian and Transit Orientation
The amount of sprawl avoided by such mixed-use compact development is the most under-appreciated, but by far creates the most significant environmental impact.

Building Design
– Many of the buildings are designed using LEED green building standards.
– One of the buildings uses an indirect/direct evaporative cooling system and a raised access floor
system for heat and cooling distribution.

Recycling
– 88% of all materials from the original mall have been reused.
– 100% of asphalt originally on site was reused for temporary road ways and the base under building slabs.

Trees
– 130 mature trees from the original site have been transplanted.