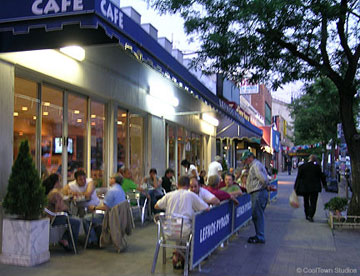 There are still some that question whether urban is in or not. Here’s further evidence that it is, especially to the ‘cooltown’ target market, based on research by the authors of the new book, Tomorrow’s Cities, Tomorrow’s Suburbs.

From 2000 to 2004, per capita income in cities increased on average from 86% to 89% of their metropolitan areas’ income, as well as the value of homes, as the desirability of city living increased in many, but certainly not all parts of the city. As the statistics show, incomes/homes aren’t as high in downtowns as they are in the outlying areas, but that’s starting to shift.

The market that’s causing this shift, according to the studies? No surprise – singles, young professionals, empty nesters and baby boomers.

While cities per capita income increased, median family income decreased from 76% in 2000 to 75% in 2004 for median income relative to metropolitan income. While this could mean downtowns were less coveted by families, based on my own ongoing interviews, it’s also because the most desirable (and safest) neighborhoods are also getting less financially sustainable with more mouths to feed. That’s where the trend of evolving ‘old economy’ manufacturing districts into walkable neighborhoods can be a supply/demand solution to keep up with the demand and stabilize home prices, like in Charlotte, NC.