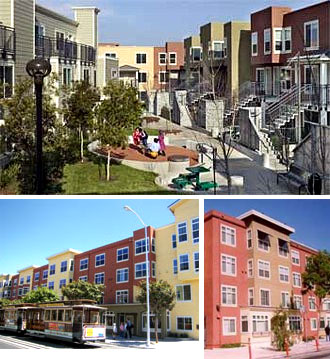 You’ve heard of stories of people who ‘escaped the projects’, but clamoring to get in them? First a little history: When suburbia was taking off post-WWII, the federal government’s urban renewal program built hundreds of public housing projects in the city that were so universally ill-designed (and probably purposely so) that they became known as the projects, synonymous with crime, vandalism and drugs.

It’s a good thing people evolve, because the project pictured here (and yesterday) is indeed a government project – North Beach Place, San Francisco – and there’s a waiting list to get in. The point is not that government should provide more housing (the program that funded this has since been gutted by three-fourths anyway), but that it’s investing in places that prioritize both diversity and inner city quality of life, something it hasn’t done in decades, or maybe ever. It’s kind of important, being that those are two keys to modern economic growth, according to many economists including Richard Florida.

Now, if government doesn’t have the money anymore to fund more affordable housing, what can they do instead? Legislate inclusionary zoning, and for the most part, get out of the way of innovative developments by recognizing them and expediting their approvals from years to months (time is money to developers;) allowing a greater density of smaller units; and letting the market decide how many parking spaces they want, which are a huge cost factor in urban development.