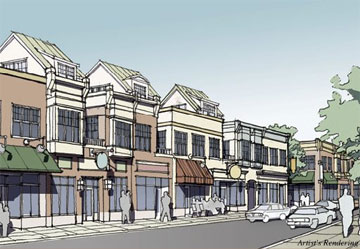 Most people haven’t exactly heard of Collingswood, New Jersey. It borders Camden, and is within the greater Philadelphia metropolitan area. Well, having a ban on the sale of alcohol in restaurants and bars (which I guess means there are none) doesn’t exactly help in attracting the demographic that tends to start new companies and spawn jobs, but at least you can bring your own, which to many may be even better.

A sign that the borough’s residents are embracing an evolution from the mass-production industrial old economy is the Lumberyard Condos, 120 new residences and 21 retail shops on a former lumberyard – in the heart of downtown.

As one resident puts it, “It turns out there are more than a few folks who prefer the walkability, neighborliness and retail diversity associated with a Main Street to the driving, anonymity and chain-store sameness of strip malls and big boxes,” and another, “I’ve put my name on the (long) waiting list to purchase one of those beautiful condos at The LumberYard!! It’s where I want to be.”