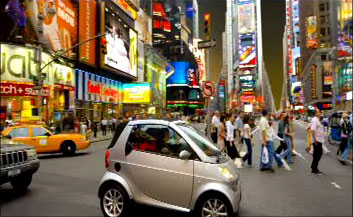 …the Smart car would be it, and as of yesterday, it’s officially coming to the U.S. (finally) in less than two years… and speaking of Dublin’s medieval pedestrian-only streets in yesterday’s entry, this is probably the only car in the U.S. that would fit, not that they’re allowed in the Temple Bar district.

Though not quite stackable, Smarts are found all over Europe, especially in the narrowest streets throughout Italy where pedestrians come first. They were originally designed to be as long as the largest cars are wide, so they can park perpendicular (no more parallel parking!) …and talk about a car for the creative class – the car got its name from Swatch Mercedes ART with the tagline purpose, “to transport two people and a case of beer.”

What’s the real story? Even major automakers are acknowledging that we’re shifting to a more pedestrian-oriented urban quality of life, as the chairman of DaimlerChrysler says, “The time has never been better for this – and I am convinced that the Smart as an innovative, ecological and agile city car will soon become just as familiar a sight on the streets of New York, Miami or Seattle, as it is today in Rome, Berlin or Paris”. Just as long as it creates more room for those poor Manhattan pedestrians…