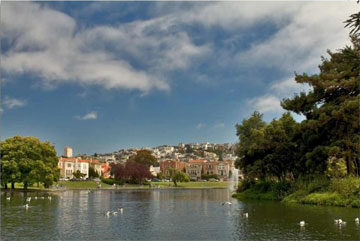 Really? So documents this Newsweek article (part of a series presented in the last entry), Wildlife: Cities Are the New Jungles…

“You can take any big city and find more species, more diverse habitats than in just about any national park or nature reserve,” biologist Josef Reichholf, Munich Germany’s Technical University.

It’s actually the lack of bio-diversity found in extensive mono-culture, chemically treated, single-crop farms that in turn support fewer species. Cities meanwhile host countless diverse micro-habitats: a wide variety of parks, street trees, backyards, gardens, greenbelts and even the buildings themselves. Berlin hosts two-thirds of the 280 bird species in Germany. Biologists estimate that agriculture and forestry cause over 80% of species deaths worldwide, versus just 15% from development of any kind. Imagine how much lower that latter number would be given the much smaller urban vs suburban footprint.

The evolution of cities as wilderness habitat, urban ecology, is growing in study. The U.S. National Science Foundation now studies ecosystems in cities like Baltimore and Phoenix, and universities from Virginia Tech to the University of Halle in Germany have urban biology programs.

That’s right, animals, birds and plants prefer cities over the ‘burbs as much as the readers do.