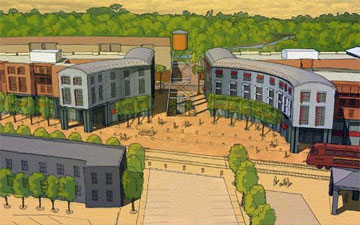 There’s no shortage of rhetoric on building urban eco-villages, but not much gets pass that stage. The proposal for New Railroad Square in Santa Rosa, California is one of the few that has.

Sonoma Marin Area Rapid Transit, a quasi-government agency formed in 1999 to establish a 75-mile commuter corridor (Cloverdale to San Francisco), took the lead with a 5.4-acre site they own at a Santa Rosa train station. The sent out an RFP (request for proposal) and awarded it to a development team that includes Creative Housing Associates, Lambert Development, and Santa Rosa’s Hugh Futrell Corp. It’s imperative to note that the agency requested the green development focus.

The project consists of:
– 250 condominiums in buildings three to five stories, 37 for low-moderate income.
– Ground floor retail including the Sonoma Food and Wine Center, a nonprofit that promotes local farmers. The center will consist of an indoor market of small vendors, as well as a farmer’s market in the main plaza, (pictured), and will be framed as the projects cultural heart and soul.

A bit of history and culture will be retained with the restoration of a 70-foot water tower to be used to filter rainwater and irrigation. Dan Solomon, of WRT/Solomon ETC, the urban design firm for the project, states, “We want this to be an authentic piece of the culture and economy of the place.”