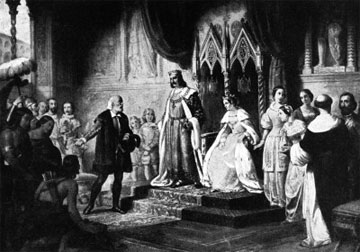 Continuing yesterday’s entry using Jared Diamond’s Guns, Germs, and Steel as a historical model in determining where to invest in real estate…

First, how did large populations become technologically-rich societies? If Europe and China were the world superpowers in the 1400s, why didn’t China ‘conquer’ the Americas ‘first’?

Large-scale food production resulted in ever greater populations of people, which in turn required political and writing systems to manage it. This in turn facilitated a formal program for technological development, especially as larger populations required an advanced defense to protect it from invasion. However, this is where Europe and China diverge.

Enter Christopher Columbus, a 15th century Steve Jobs if you will. He was seeking an adventure capitalist for his ‘business idea’. Good thing he wasn’t in China, since the government at the time banned shipping outright for the simple reason that they didn’t think it was important. Sound like some current city administrations? Europe however, was widely diverse, featuring multiple countries with multiple viewpoints. Columbus was refused funding from four government entities in three countries before the king and queen of Spain got with the program. (pictured)

So what does this have to do with real estate? Reiterating yesterday’s and today’s points:

– Societies required the right seeds and animals to produce enough food, and proximity to animals provided immunity from disease. Knowledge is our present-day economic ‘food’, thus universities are the modern-day equivalent to seeds and animals, with the equivalent of disease being lack of education.
– Cities host the densest, largest concentrations of people. That’s where you’ll find innovation and forward-thinking investors. There is no danger of a crippling invasion from neighboring cities, but there is now a threat of an equally devastating exodus of talent, aka brain drain.
– Just as Europe was diverse, decentralized and thus creative – allowing Columbus to find capital for his trip, the cities that rank high on the creative index today will provide the same for entrepreneurs.
– Apply the same rationale to identify the most creative neighborhoods in those cities, down to the most creative buildings or sites (in cities near universities), and you’ll have a sound plan for where to invest in real estate, and that’s where CoolTown Studios specializes in linking up developers and investors to do just that.