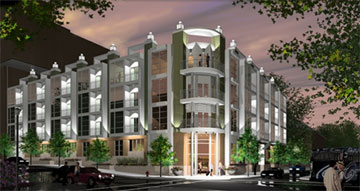 Sometimes brands become so associated with their past that there futures are limited by it, such as Polaroid and Kodak, which have long been synonymous with instant pictures and film processing. Both have quickly become obsolete in the digital transition. Brand experts often suggest starting with a new name altogether. Affordable housing is one of those.

The word ‘loft’ on the other hand is being watered down by just about every developer calling their new urban residences ‘lofts’. While in a previous entry I started to highlight definitions to distinguish them, here are better industry terms – ‘hard loft’ and ‘soft loft’, by leading housing market analysts, Zimmerman/Volk:

“Unit interiors of ‘hard lofts’ typically have high ceilings and commercial windows and are either minimally finished, limited to architectural elements such as columns and fin walls, or unfinished, with no interior partitions except those for bathrooms.

Unit interiors of ‘soft lofts’ may or may not have high ceilings and are fully finished, with the interiors partitioned into separate rooms.”

The image above is of Court 6 in downtown Charlotte NC, an attainable hard loft development. Charlotte, by the way, is a benchmark for attainable housing.