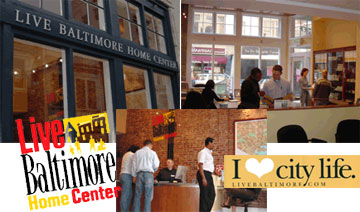 In the last two days we looked at the Attracting the Young, College-Educated to Cities study, whose researchers stated that the #1 task on cities’ to-do lists is to personally show potential residents how great its neighborhoods are, rather than just present them online (and most don’t even do that).

The Live Baltimore Home Center does just that. Not too far from the central train station, it’s a one-stop shop for determining how much home you can afford, researching over two hundred neighborhoods, and talking to both the center’s staff and on-site real estate agents about neighborhood specifics and home-buying incentives.

However, since the center staff and real estate agents are pretty much forbidden by law from revealing which neighborhoods are the ‘coolest’, start with those closest to the downtown, like Federal Hill, Fells Point, Canton and Butcher’s Hill. Any others?

Next up – models for marketing a specific neighborhood or commercial district.