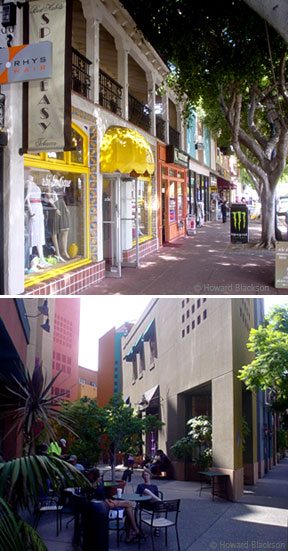 While towns and cities are putting up official signs (see yesterday’s entry) to declare their inclusiveness of different people and cultures, one city neighborhood that hasn’t needed one for a while is Hillcrest, San Diego, referred as the city’s Greenwich Village.

According to urban designer and former City of San Diego planner Howard Blackson, “Hillcrest is a Richard Florida prototype. The gay community found a home here in the late 80’s as it had cheaper rents (artist, designers, fashion). It had a quality stock of buildings to reinvigorate and the people simply made it happen. The rise of Hillcrest led to the revitalization of several older streetcar neighborhoods.”

Howard also provides some placemaking insight as to why the historic 5th Avenue retail street (above image) is so much more active with people than the new Village Hillcrest development (image below), even though it’s architecturally attractive:

Village Hillcrest is corporate-run, chain-driven, and devoid of both housing and a diversity of unique, local restaurants with outdoor seating facing either the street or interior courtyard. Meanwhile, the 5th Avenue retail district is a collection of local, authentic, independent restaurants and shops, with a rich array of neighborhood housing, dining, drinking and entertainment choices.

Which one would you rather hang out in?