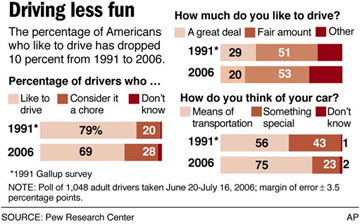 Based on this chart spanning the last 15 years, the increasing % of Americans who now consider driving a chore is equivalent to 20 million more people, in addition to the 40 million who already find it a chore, on top of the 90 million who don’t/can’t even drive. Since crowdsourcing was defined in yesterday’s entry, here’s a way to apply the means (crowdsourcing) to the end (driving less/walking more).

First, crowdsourcing is an excellent tool to communicate a vision. For instance, have you ever seen the movie Office Space? (It’s explained nicely on Wikipedia, a crowdsourced encyclopedia.) The opening scene shows a commuter stuck in traffic while an elderly man with a walker advances faster than his car. In fact, wouldn’t it be easier to just show you the scene? Thanks to YouTube, a crowdsourced library of videos, you can watch that scene right here. In urban planning, crowdsourcing a vision is manifested via a charrette (again, thank you wikipedia).

Second, find your city’s share of the 150 million who are fed up with or don’t drive (half the population) and as described yesterday, crowdsource them into a beta community to design, develop and move into the coolest darn pedestrian-oriented urban village ever seen (or walked).