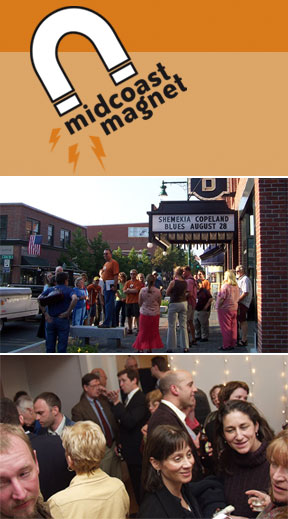 The creative class population of Maine’s northern MidCoast region longed for more of the kinds of jobs, housing and entertainment/nightlife they felt was necessary to retain them and attract others to Maine, so they took it upon themselves to make that message clear and established Midcoast Magnet, “a non-profit organization of people dedicated to vibrant culture, entrepreneurship, and bringing people together socially and professionally”. The governor was so impressed that he had the state throw in a matching $25,000 grant to help get the group going.

Their goal is to “bring people together to develop innovative projects that support creativity, livablity and economic sustainability” – which is essentially what the CoolTown beta community is all about – establishing a community of future tenants that invest in and design the very buildings they’ll eventually move into.

Why is establishing a creative class talent pool so important to the region? As Noah Keteyian, Midcoast Magnet’s executive director says, “Companies need to see a talented pool of workers who understand how to work with creativity and innovation. Those are the companies that are fastest moving, that are providing the best jobs.”

So, what is the detailed vision of the Magnets (as its members are called), and what is their strategy to get there? More tomorrow.

We profiled another such creative class group previously, CreativeTampaBay.

Do you know of any other similar grassroots groups? Are you interested in starting one in your community? Do you see such a group making a difference?