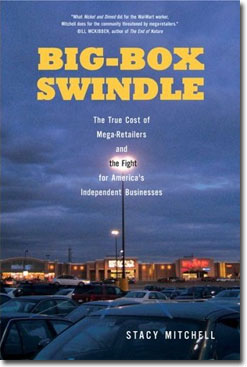 Is there a standard definition of what a local, independent business is? Or in other words, when does an independent business become a chain? There’s probably no better person to ask than Stacy Mitchell, a senior researcher at the Institute for Local Self-Reliance and author of the just-released Big Box Swindle: The True Cost of Mega-Retailers and the Fight for America’s Independent Businesses.

An excerpt from the book:
“There is no commonly agreed upon definition, but in this book, a locally owned, independent business is majority owned by one or more people who live in the community, who have full decision-making power over the business and operate few enough outlets that they remain personally connected to their employees and customers. This excludes most franchise outlets, like McDonald’s and Subway. These are ostensibly owned by a local entrepreneur, who invests time and money in the business, but does not have full decision-making power and must follow rules handed down by the franchise corporation, which also takes a share of the profit. As for the last characteristic, there is no hard and fast rule about the number of outlets before a independent business begins to function more like a chain, but the regular presence of the owner working at the stores is a good sign. Businesses with two to three outlets usually pass the test, and those with more than a dozen rarely do. Those in between might fall on either side.” End of excerpt.

Stacy continues, “Many independent business alliances have also created membership definitions. This is the definition my local alliance in Portland, Maine, adopted (it’s a variation on a model definition written by AMIBA)”:
“The business must be in Portland and must be locally owned and independent. We define those terms as follows:
“Locally owned” means the business is privately held and the owner or the majority of the owners live in, or in close proximity to, Portland at least part of the year. This includes employee- and cooperatively owned businesses, as well as nonprofits, but not government units. The business must be registered in Maine with no corporate headquarters outside of the state.
“Independent” means the owner or owners have full decision-making authority over the business, and the business has no more than 10 outlets, with the majority located in Maine.
“Have full decision-making authority” generally excludes franchises. We picked 10 as the number beyond which you are a chain. It’s a subjective call, obviously, but at some point the owner is no longer really engaged with customers and employees, and at that point you lose much of the community and social capital value of local ownership.”