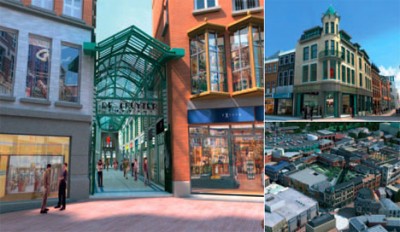 As the Netherlands shifts from industry to knowledge-based economy, they certainly know their placemaking, transforming blocks of a neglected industrial district into a $150 million mixed-use development, Arnhem City Center, known locally as ‘Musiskwartier’.

Opening last month, the predominantly a retail/entertainment center hosts a residential community above its shops of condos with terraces, gardens and balconies. The largely pedestrian-only development features a timeless architectural fabric, multiple paseos, and a new market square. While the public spaces are free, unfortunately all the homes are upscale and much of the retail consists of chains.

The project’s financing is also a model for future investments of this kind. The forward-thinking Netherlands-based developer, Multi Development sold the project to a series of pension funds – an increasingly reliable source of long-term capital for future urban investments, mainly because their return on investment requirements have markedly lower demands over much longer periods of time.