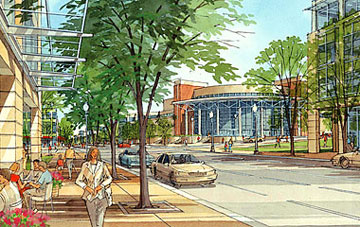 So why is the University of South Carolina’s Innovista (profiled yesterday) worthy of proclaiming itself as “the model for the new research campus of the next 100 years”?…

…When’s the last time you’ve seen a research “park” with marketing like this – “Imagine your home is a meandering stroll from your office. Along the way you pass delightful distractions, quaint bistros, art galleries, and unique shops. Just a few more steps and you’re on a tree lined riverfront parkway, or watching a ballgame or concert.” The more aptly described research village, with a mix of housing, office and retail, also features an extensive number of public amenities including a waterfront park, amphitheater, walking and biking paths and a grand public plaza.

Not only is the planning progressive, master-planned by the acclaimed Sasaki Associates, Boston, but so are the district’s industries – biomedicine, nanotechnology, environmental science, public health and alternative fuels (including fuel cells). It’s no coincidence that the presence of intellectual capital in environmental science and public health has provided the research village itself with an emphasis on sustainable design and fitness.

As a result, it’s a good guess that Columbia won’t be suffering from much brain drain in the coming years, and there are already indications that people are moving back to the downtowns. The name – the riverfront area is traditionally known as “the Vista”, and of course “innovation” prevails throughout – says it all.