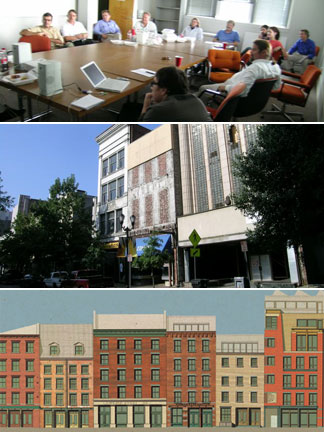 You know how real estate is… ‘wait until they build what you want’, which could be years from now if ever. Well, last week some of the most creative, entrepreneurial and intelligent in Louisville, KY took it into their own hands not to wait, meeting at the University of Louisville and other venues to establish what is the only official, active beta community to establish a vision for partnering developers and investors to implement.

Focusing on the downtown, they wanted a place that stimulated intelligent discussions, price attainability, safety at night, a critical mass of pedestrians and residents, a sense of community, vibrant energy and life, more local independent nightlife venues, events like a nearby art gallery night, and more places to go with local friends. Stirred by a progressive independent restaurant owner and facilitated by CoolTown Studios, the group came to a proposition with the developers that if they supplied the base of tenants for development via a 500-member beta community, that the developers would permanently recognize that group as the 500 founding members of that new community, providing a pre-sales housing discount (10%) and working with commercial tenants to pledge a 10% founding member discount as well – it’s presently called the Neighborhood of Tens.

You can track growth and progress of the initial beta community of 24 individuals here, and better yet, join or refer others to the group (general email link at the bottom right) if you have connections to Louisville, and meet some great people in the process.

Image: the initial beta community meets for the first time at the University of Louisville (above); the key historic downtown block (middle); a vision for what it could look like (below)