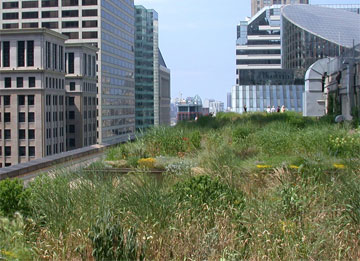 It seems the hybrid car phenomenon is spreading to green building – though while auto manufacturers are finding the market for hybrids is finite, not so for buildings, as it’s quickly becoming a standard demand by the next generation of home buyers.

Here’s just a few of the recent stories this month alone:

– 1600 homes over 34 blocks of mixed-use green development (along with plans for the largest natural drainage system in the U.S.) will replace failed public housing via a public-private partnership in Seattle.

– Chicago’s Mayor Daley of Chicago has had long-time plans to make Chicago the sustainable capital of the U.S., lately touting a major exhibit to advance this vision, Sustainable Architecture in Chicago: Works in Progress. (Pictured – City Hall’s green roof)

– Universities are going green, with sustainable initiatives being voted on by its students, largely because they want to establish their eventual alma maters as role models.

– Speaking of setting an example via education, Portland voters are advocating a measure to build 19 new green schools. Portland has a long history of raising the bar for sustainable development.

The key now is ensuring green building design is human-oriented rather than machine-oriented, as all too often the latter is the result.