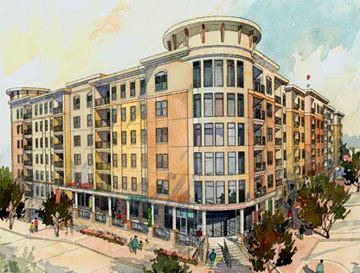 What happens when a small city invests in attracting the creative class? You have a city like Columbia, SC with a population of 117,000 adding 7000 new residences downtown within the span of a few years.

– It has a major university, and is building a university research village (Innovista), not a university research park, that will create 8700 knowledge-economy jobs.
– Developers are building appealing, human-scaled lofts and apartments, both contemporary and historic to appeal to different tastes and ages. In fact, while the research village provides for the younger population, the downtown is filling with boomers.
– Of course there are changing market conditions that every city is experiencing, like the fact that less than 25% of all households consist of married couples with kids.

Then again, all you have to do is listen to the new downtowners:
“Neither one of us wants to commute,” Larry said. “We don’t want to drive.”
“It’s the lifestyle of being able to walk to places.”
“We fantasized about London or New York but couldn’t afford it. We looked at Asheville, but having the USC campus here outweighed the good things Asheville had to offer. And Greenville didn’t have a theater that showed art films.”
“I live downtown, and 98 percent of my meetings are downtown.”
“I don’t like suburbs. I want to be closer to the action. Closer to Five Points, to the Vista, to life, to music, the theater. From downtown, I walk to all these things. We walk everywhere.”

However, the downtown amenities are so desirable that it may take a while before the supply catches up with the demand, as prices aren’t necessarily what you’d expect from a small Southern town. The units in the Adesso (pictured) start at $275,000! Most of the more attainably-priced homes are forthcoming in the 3000-residence university research village. So, developers, keep developing!