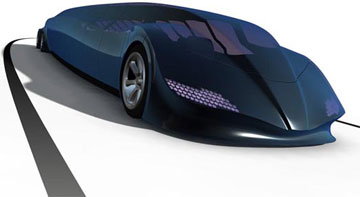 That’s the thing about mass transit isn’t it? It’s extremely practical and environmentally-conscious, but sooooo uncool. Well, one of the only uncool things left about city living is destined to change in a few years as well.

Almost two years ago, this website profiled the benefits of bus rapid transit (BRT), and how it is able to operate on both high-speed paths and regular roads. Well, mass transit is evolving pretty quickly in light of the renaissance of cities around the world, and the Dutch plan to demonstrate its Superbus (see report in English here) at the Beijing Olympics in 2008.

What makes it cool?…

– Just look at the thing! The project’s chief designer previously worked on Formula 1 cars for Ferrari and BMW.
– It’s electric, and switches seamlessly between ordinary roads and dedicated ‘supertracks’ at up to 155 mph, at which it would engage in autopilot.
– There are separate doors for each of its 30 or so seats. Fares would probably be paid by smart cards.
– Holding true to our growing customer-driven, mass customization economy, passengers will text-message requests for stops. See video.

City living will never be the same. The point of this article? Better invest in urban real estate now before you miss the bus.