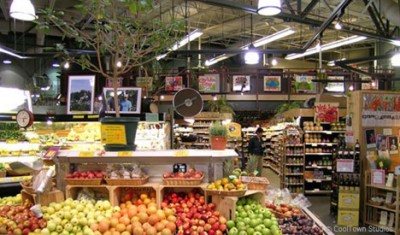 Good neighborhood supermarkets are hard to come by. Trader Joe’s and Whole Foods are the de facto choices by the downtown crowd, though the former has a limited selection and the latter caters to an upper class income. The most progressive neighborhoods in forward-thinking cities like Madison WI, Burlington VT, Cambridge MA and Ann Arbor MI have it figured out – co-op supermarkets.

As you can see (above), co-ops have evolved – they’re organized via grassroots efforts, but don’t look like grassroots efforts. In fact, they’re sharp-looking, well-managed, and price competitive because they follow the mass customization/crowdsourcing/beta community model of future patrons organizing to design and develop the grocery they want. In fact, as a result, most of them have built-in cafes (right) and community bulletin boards.

The question then becomes, how does one start a co-op supermarket? The answer is with the Food Co-op 500 (perhaps a play on the Fortune 500), cooperative effort to help establish a total of 500 co-op supermarkets in 10 years (there are 300 today).

Finally, you can ‘find a co-op supermarket near you’ with the Cooperative Grocer Directory… and if there isn’t one, you now have an idea of how to solve that!