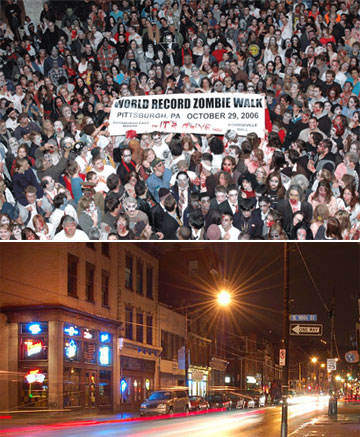 Pittsburgh has had a tough transition from its prosperous industrial economy to the knowledge economy, but there’s a sign it’s now on track – zombies.

As there is now a creative, bohemian neighborhood in every city, and creativity leads to jobs, the South Side neighborhood is one of Pittsburgh’s key generators of economic revitalization. Some unexpected evidence of its creative influence manifested itself via its first ever Halloween-themed event that only the most forward-thinking cities like Toronto, Vancouver, San Francisco, and Richmond, VA have dared – a zombie walk. In fact, Pittsburgh had two.

So what? Any event where you can get 400 people that aren’t afraid to get silly in the general public is a great sign of creativity, open-mindedness, and risk taking, qualities that are vital to entrepreneurship. Keep in mind that the aforementioned cities that have such walks are doing just fine economically. The walk is also an example of civic tourism, establishing a regional event based on local culture and history, in this case, the fact that Night of the Living Dead was filmed in Pittsburgh (which is screened after the walk – can you imagine the scene at the theatre?!).

Finally, a contemporary cultural event based on history helps brand the city, something many cities struggle with when asked the question, “If your city vanished, would anyone miss it?” What’s your neighborhood’s ‘zombie walk’?

Thanks to members of Flickr for the top, bottom images.