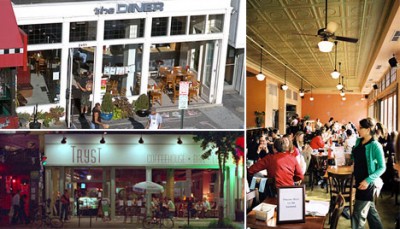 Here’s the catch 22 – the most culturally, economically rich cities and towns focus on local, independent, diverse restaurants and retail, however, it’s the national chains that can pay $60-$100/s.f./year when most start-up indie businesses can only afford $7-$20/s.f./year. That’s a serious problem if cities don’t share in the economic benefits they receive from local independent businesses.

There’s an answer somewhere in the middle, and today I’d like to announce a new term in the CoolTown lexicon. First we introduced the beta community in 2004, and as a solution to the growing aforementioned dilemma, we’re now recognizing the rise of the V.I.B.E. – the variegated independent business entrepreneur, defined as a successful entrepreneur who has the ‘midas touch’ as far as opening multiple unique, experience-economy-oriented, authentic, independent, often triple-bottom-line restaurants, shops, galleries and entertainment venues, or even all of them combined into one.

For instance, Adams Morgan in Washington DC has a few VIBEs, and the image above shows three such destinations established by a single VIBE within a few blocks of one another within the last five years or so, all of which have become overnight neighborhood institutions.

ps The CoolTown Studios office is directly above The Diner. See the door to the right?…