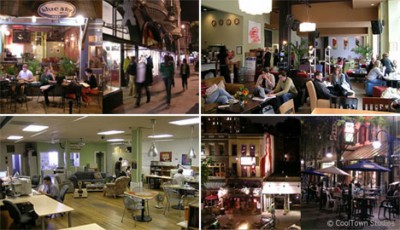 Media economy – “an economy based on media, mass communication and services over mass-produced goods, no longer based on large, centralized companies. Instead, it flourishes amid a decentralized network of small businesses and entrepreneurs and the creative, urban places that support them.”

What better way to illustrate and understand how cities can compete in the information age than to co-publish a report with someone from the millennium generation, its emerging target market. CoolTown Studios teamed up with Mike Lydon, a Planetizen correspondent (see the article at the top of their home page) and a Masters Candidate at the Taubman College of Architecture & Urban Planning at the University of Michigan to bring you How Cities Compete In The Media Economy.

It wouldn’t be a CoolTown-sanctioned report however, without a connection to implementation. Just about every city now has a creative, entrepreneurial district (or at least a vision for one) that embraces the media economy, and to support that, CoolTown provides a $150 million real estate equity fund that’s looking to invest a minimum of $5 million per project in developers that ‘get it’. That’s something city leaders can take a lead on as far as catalyzing. We don’t define what the developments for these investments are, we enable people to define it for themselves and as a community, then have developers build it for them. That’s what our beta communty program is all about, and something the aforementioned investors prefer because it reduces their risk by having the tenants secured beforehand.