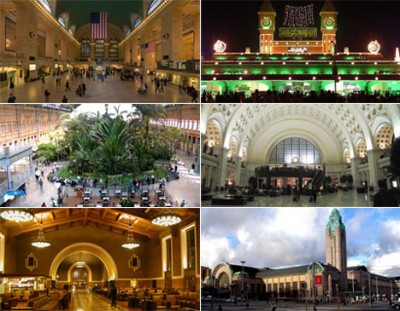 There is probably no greater diversity or activity over a given time period than at your city’s train station. So, which ones do the best at inspiring people to linger, want to return, or regret leaving? Here are some examples, with a primer provided by the UK’s Guardian and their local favorite in London.

Clockwise from the top left:

Grand Central Terminal, New York, 1913 – There’s a reason why it’s featured in so many movies, referred to by The Guardian as the world’s most romantic meeting place.

Lahore Railway Station, Pakistan, 1862 – Another Guardan favorite, this medieval storybook-influenced destination is as much a cultural marketplace as it is for travel.

Union Station, Washington DC, 1907 This one deserves special note – not only is the station itself beautiful (filled with shops, restaurants and even a multiplex theater), but even the individual subway stops have the same dramatic feel.

Helsinki Central, Finland, 1919 – Per the Guardian’s description, “the principal entrance arch leads into a concourse, and rooms as imaginatively detailed, perfectly maintained and calm as a Lutheran cathedral.”

Union Station, Los Angeles, 1939 – A more intimate, elegantly crafted train station fit for Hollywood’s stars, who ironically no longer use it. Maybe in about 30 years.

What is the most beautiful train station you’ve experienced?