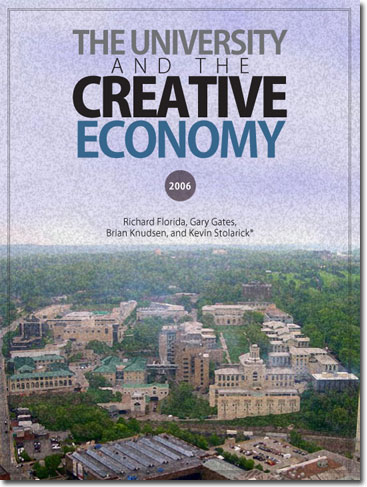 Many of us enjoy that college town feel of a pedestrian-oriented urban fabric, indie hang-outs and diversity mixed with enlightened conversation. Which cities do well in this regard, which don’t, and why?

Creative class economist Richard Florida provides some answers with his colleagues in their recently published, The University and the Creative Economy.

As far as statistics and rankings, the study introduces two new ones:
Brain Drain/Gain Index (BDGI) – measuring and ranking cities by the extent to which they attract and retain college educated talent. See the study for rankings by city size.
University-Creativity Index – a combined ranking of a region’s university
and its overall strength in the Creative Economy.

These are used to provide the following conclusions regarding the potential of city-university regions to stimulate economic growth:

“The university comprises a potential – and, in some places, actual – creative hub that sits at the center of regional development. It is a catalyst for stimulating the spillover of technology, talent, and tolerance into the community”:

– Technology: While universities are a leading resource for technological innovation, that does not necessarily translate into economic growth without the other two ‘T’s’.
– Talent: The host city most do its part to invest in the kinds of places, amenities and culture to retain the talent attracted by universities, measured by brain gain/drain. That’s what much of this site is about.
– Tolerance: This is simply having a culture where a diversity of people feel welcome – women, minorities, lifestyles, young/old.

The study concludes: “The regions and universities that are able to simultaneously bolster their capabilities in technology, talent and tolerance will realize considerable advantage in generating innovations, attracting and retaining talent, and in creating sustained prosperity and rising living standards for their people.“