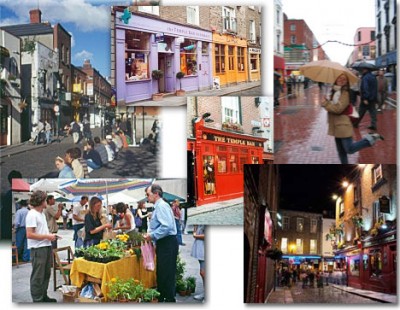 The sixth principle is Stories. How will you get people to act, to implement, the ultimate goal of any idea. You would tell a story, and not just any story, but in reading the last several entries, you’ll know it would be a Simple Unexpected Concrete Credentialed Emotional Story (notice the acronym, which is a bit cheesy, but easy to remember and relevant).

First of all, avoid suffering from the Curse of Knowledge (a fundamental Made to Stick rule of thumb) in telling abstract stories that reflect your grand vision (ie most commercials and conference presentations), but instead tell real stories of how your grand vision was implemeneted, like…

The story of how a neglected, historic, pedestrian-only neighborhood in downtown Dublin, Ireland slated for demolition cheated its planned destiny to become the most popular (maybe too much so!), photogenic destination in the city, or…

The story of how progressive residents in Freiburg, Germany took it upon themselves to become a co-developer with the City (ie a beta community) so they could live, work and play in what is literally their dream neighborhood. Ironically, now that’s what the American Dream should be known as.

For a primer on business storytelling, you may want to use this structure from Bill Jensen’s Simplicity: The New Competitive Advantage:
1. Conflict:Ã‚Â  ‘Burning Platform’ – The business case for change
2. Transition:Ã‚Â  ‘Where We Are’ – Successes/progress and failures to date
3. Climax:Ã‚Â  ‘Success this year’
4. Close:Ã‚Â  ‘Destination’Ã‚Â -Ã‚Â Mission, can also include Vision, Values

Image: What became of that abandoned neighborhood in Dublin, Ireland, today known as the Temple Bar district