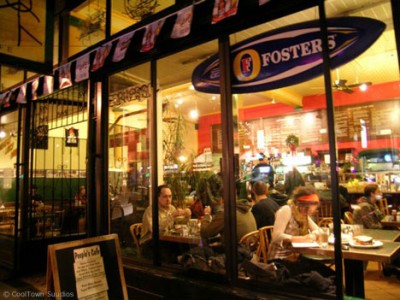 Above: Patrons of People’s Cafe in Upper Haight, San Francisco. Soon they’ll be able to work via their laptops too…

As we all know, since 1949 the government’s been paying for all our roads (ie our asphalt infrastructure), but since the advent of the internet we’ve had to pay for it. Well, San Francisco is the first city to sign a contract to provide free wi-fi and internet for all in the city… a digital infrastructure. Earthlink is providing the wi-fi network, and Google the free internet access.

What’s the significance? As an envious Pasadena entrepreneur puts it, “It’s also good for the continued development and maturation of what Richard Florida dubbed The Creative Class. Cities that offer free WiFi service will do much to attract the young, the hip, the creative, the geeky, the artists and entrepreneurs and aspirers who breathe life, business, and spending into the urban… It’s time for the Powers That Be in Pasadena to beg and worship and plead with Google/EarthLink to bring some of the free WiFi love to Pasadena.”

It also means in an ever increasing information-based economy, we’ll be relying less and less on vehicular traffic and experiencing less downtime in traffic congestion, and more on literally working wherever, whenever we want for pennies a day (the equivalent of taxes.) No other U.S. city can claim that for every single resident as far as I know. Internationally, that’s another story.