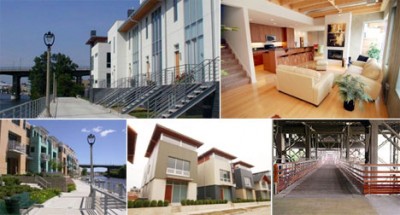 In each example, the city established an RFP competition for multiple sites, selecting multiple developers. The primary reason? Diversity and variety, which speaks to authenticity, which is paramount to a creative class that dispels much of new urbanism on account of sterility. In the case of the Holiday neighborhood on a former drive-in theater site in Boulder, CO, the housing authority (the city entity that owned the site) also accepted a smaller financial return than would have been demanded by a master developer, resulting in more attainable homes, another key creative class requirement.

For the Beerline B industrial riverfront district in Milwaukee, WI, the city created a competition for parcels as small as feasible, (often under two acres) to encourage multiple developers. Why? They felt (and they were right) that the development would happen faster than with a single master developer, and resulted in more innovative designs and variety of residences. This interactive map displays the different properties in Beerline. This, by the way, is how we would display a multi-site ‘cool town’-oriented RFP for your city, with a ‘cool town’-oriented $150M real estate equity fund standing by… if needed.

Was the ‘open source’ program successful financially? Take Beerline for instance. With $200 million invested in an undesirable area since 1999, over 1000 residential units built or approved, and $25M in TIFs (project-generated taxes reinvested into the project), you be the judge.