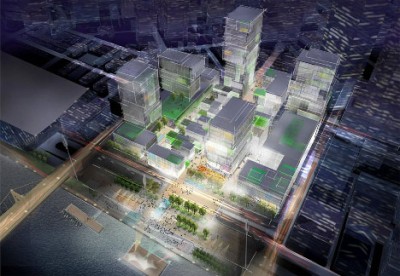 How important is Pittsburgh’s creative future? $460 million worth, in what is billed as the nation’s first master-planned, green, mixed-use neighborhood, referred to as the Cultural District Riverfront Development.

You know the times are changing when the following words are spoken by a state governor (Ed Rendell):

“Working together, we’re funding projects that will draw people back downtown to live, work and play. It’s the same successful approach we’ve used across the state over the last four years to bring new investments to our cities and towns. By supporting the re-birth of Pittsburgh’s cultural district., we’re opening the doors to a better quality of life for local residents and stirring new opportunities for the city.

Increasingly, cities are recognizing the importance of going green. Designing this section of the city with the environment in mind is a wise decision, as it lessens energy consumption, provides a more attractive setting, promotes healthy living, and reduces operating costs over the long run.”

The six-acre site has a goal of becoming one of the nation’s leading urban arts and residential centers, featuring a performing arts venue, major public park, hotel, 700 new residential units and workplaces for 9200 jobs with an economic impact exceeding $1 billion.

More info on the state’s financial involvement here, and on the overall project here.