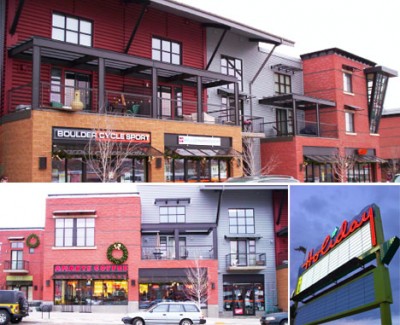 If you’re familiar with the open-source form of business development that’s becoming the standard for the fastest growing companies, and read the entry introducing the Holiday Neighborhood’s application of such in Boulder, CO, you may be interested in the story behind it all.

Here’s a brief timeline, with a more detailed summary in the American Planning Association article, They’re Bolder in Boulder:

– 1969-1989: Drive-in theater operates on 27-acre site.
– 1990: Drive-in owners’ plans for big-box development clashes with City’s vision for mixed-use, pedestrian-oriented development. City wins out and begins working with the Boulder Housing Authority (BHA) to plan an affordable neighborhood, led by Cindy Brown, co-executor for development.
– 1995: City completes citizen-driven community plan for area, detailing the vision for mixed-use, pedestrian-oriented neighborhoods.
– 1997: City purchases the site from the owners.
– 1998: BHA purchases the site from the City and commences with development plans, incorporating extensive public participation and a goal to catalyze what would appear as a diverse neighborhood and not a ‘project’.
– 1999: BHA first sends out a request for letters of intent (LOI) targeting developers, commercial tenants.
– 2001: Boulder Housing Authority changes its name to Boulder Housing Partners (BHP), to focus on a public-private partnership to develop the site as that diverse neighborhood, with attainable housing, neighborhood park, community garden, and small blocks and buildings oriented to the street.
– 2002: After BHP’s request for LOIs attracts 45 letters of interest from developers and commercial tenants who share the community vision, seven developers are selected.
– 2003: Holiday Neighborhood breaks ground.
– 2007: Development is finalized, the ~500 residents are fully engaged in improving their community and hosting events, and the surrounding areas start to follow their lead with similar investments.

Image: The restored Holiday drive-in theater sign, and the new surrounding developments inspired by Holiday – Greater Holiday you could say.

How did Boulder Housing Partners put it all together? More tomorrow…