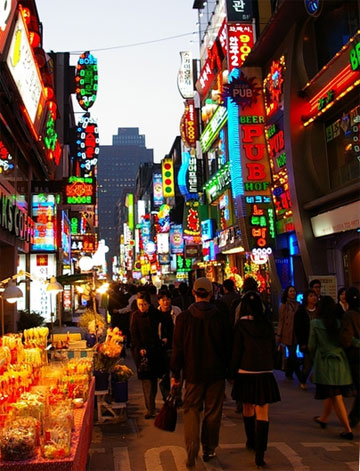 The most economically, culturally competitive cities will be the first to transition from an industrial-economy auto-oriented infrastructure to an information-economy digital one. Who’s in the lead? According to Daily Wireless’ 10 Most Connected Cities in the World:

1. Seoul, South Korea (pictured) – The second most populated metro area in the world (22 million) plus a reputation as the world leader in modern technology helps make Seoul the undisputed leader. With 10mbps broadband (four times faster than in most U.S. households) for $20/mo. in 83% of homes, it’s no wonder video games in Seoul is the cultural equivalent of baseball in the U.S.
2. Taipei, Taiwan – With 90% of the 2.6M population has wi-fi access from $4.5-$12/mo., Taipei is #1 in the world when it comes to wireless.
3. Tokyo, Japan – With the most populated metro area in the world, connectivity is a must, and at 100mbps for $50/mo., it’s the biggest network in the world for ultra-high-speed networking and VOIP phone usage.
4. Hong Kong, China – At $16/mo. for 10mbps and $34/mo. for 100mbps and ubiquitous on-demand TV, it’s the best deal in the world.
5. Singapore – Already at 65% broadband penetration, Singapore’s government is arguably the most aggressive in establishing policies to make it a world leader.
6. Stockholm, Sweden – Limited by high costs, Stockholm is the most digitally connected in Europe and one of the most active internet gaming cafe cultures in the world.
7. ‘Various Municipal Projects, United States’ – St. Cloud FL (free wifi) and Mountain View CA (free wifi) lead the way in the U.S., while San Francisco, Philadelphia and Boston have plans for city-wide wifi as well.
8. Paris, France – Within 5 years the city will have $50mbps at $40/mo., and by then it’s world leading cafe culture will take on a whole new meaning.
9. Shoreditch, England – With Shoreditch TV, the entire city is a reality show.
10. Silicon Valley, United States – You’d think the home of the leading tech companies in the world would have something up their sleeves, and they do – free 1Mbps wifi for all 4.2M residents, lead by IBM and Cisco.