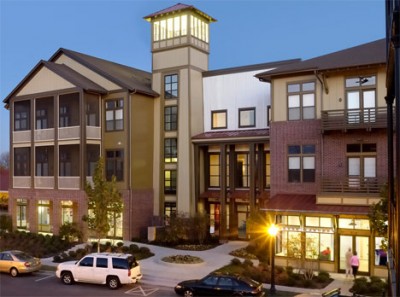 Each year the Congress for the New Urbanism announces its Charter Awards that best represent New Urbanism. Here are some of the winners for 2007.

The Region: Metropolis, City, and Town:

Long Beach Mississippi Concept Plan – Waterfront revitalization. Check out its humanistic-proportioned buildings reminiscent of Amsterdam – those are going to be in immense demand.

Harbor Town, Memphis, TN (pictured) – A 20-year old neighborhood modeled off the walkable neighborhoods of the 1920s, it has finally matured to the point of having a more active town center.

Chatham Square, Alexandria, Virgina – A textbook example of replacing neglected public housing with an elegant mixed-income neighborhood, with every one of the 100 existing public housing units exchanged in-kind either on site or elsewhere in the city.

The Ellington, Washington DC – One of the first urban mixed-use developments in the neighborhood that sparked investment and new housing throughout the area, just a few blocks from CoolTown Studios at the Affinity Lab.