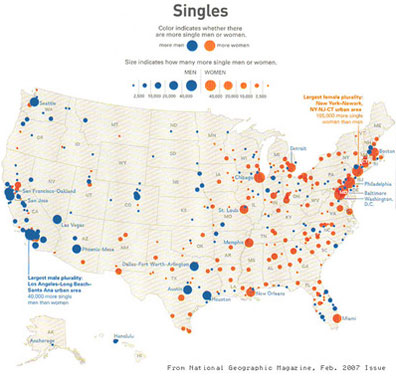 Based on this National Geographic map outlining concentrations of single women and single men, I’d venture to say yes.

It’s apparent on the map that men prefer to locate in cities built in the post-1940s auto-oriented era, while women prefer the more walkable, pre-1940s neighborhoods. It should be no surprise, given the studies that document what women prefer in their neighborhoods and what attributes make for a safe city (see findings at links). So, while the evidence isn’t new, presenting it on a single infographic is.

What does it all mean? It’s not so much that single men prefer auto-oriented development (there is no evidence supporting such, only the opposite), it’s just that women really prefer walkability, safety and convenience. Thankfully, we’re evolving toward the latter. As they say, the easiest way to attract single men is with single women, not vice versa.