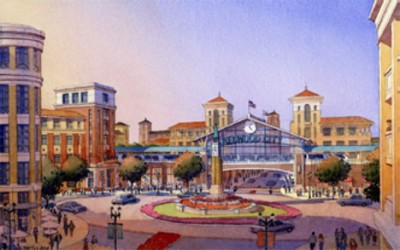 Once one of the largest cities in Silicon Valley between San Francisco and San Jose, most people today have never heard of Redwood City, much less visited there for any particular reason. If current plans stay on track, that’ll soon change.

Public and private leaders recognized that their city was being left in the dust as the neighboring towns of Mountain View and Palo Alto initiated dramatic investment in their downtowns. Shrewdly, they brought in the same urban design group that planned Mountain View’s downtown renaissance. Along with a more knowledge-economy-evolved constituency (this couldn’t have happened ten years ago), the government, business and community populations collaborated long hours to craft a truly visionary downtown blueprint, the Redwood City Downtown Revitalization Strategy & Specific Plan.

The plan’s two key components are:
– A form-based code (like the SmartCode) – the revitalization strategy. That is, the code defines the buildings’ forms, not the uses. This is the basis that explains why historic Rome to downtown Alexandria, VA have flourished for centuries.
– A re-design of the Downtown Transit Center with a prominent public space linked to the main street – the specific plan (pictured). Both aforementioned cities are known for their grand public squares/piazzas.