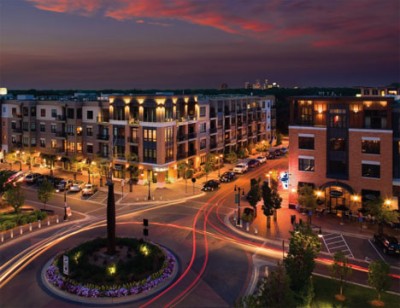 The civic leaders of St. Louis Park, an inner-ring suburb of Minneapolis, wanted a downtown where there was none. They got one in Excelsior & Grand, a 15-acre pedestrian-oriented mixed-use development adjacent to a major park.

Much of the placemaking is effectively urban, with contemporary urban architecture fronting tree-lined sidewalks, no surface parking, and high-ceiling apartments above restaurants and shops. This is a vast improvement over a strip mall or garden apartment complex. It will beautify St. Louis Park, yes.

However, will it add to the local culture and economy? Not so much. The project has the sterile look of being completed by one developer at one time (which is true), and every single one of the retail venues are chains, which subtracts from the local coffers. That also eliminates much of its potential for civic tourism. Also, its positioning as a luxury residential destination severely limits a creative, enterpreneurial population from adding to its cultural identity. It’s essentially designed as a mass-production model that can be replicated and transplanted exactly as is.

It’s ability to rise above anything more than a main street mall is thwarted by both its permament and temporary crowds, which is fine because that’s all it was intended to be. For the conscious creatives that read this blog, it’s a reminder to expect more – a lot more.

You can review the project spec sheet here.