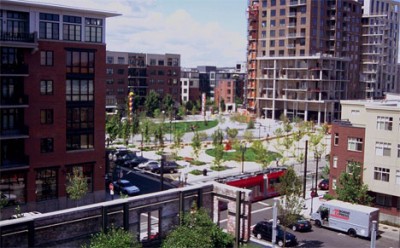 What do investors think of TODs? (Transit-oriented development) The Wall Street Journal is reporting that “in many cities, the hottest development is taking place along the train lines” and “mass-transit lines are the new frontier in urban development.” You’d better check out the article, The Little Engine That Could before it gets archived.

– There are 100 TODs in the U.S., with 100 more in the pipeline.*
– By 2030 the number of households near transit stations will rise to 16 million, from 6 million today.*
– Shrinking household sizes and increasing single households (link)
– The public sector attracts three to five times every dollar they invest in a transit system in private money.**
– Between 1997 and 2001, office and residential property values near Dallas transit stations increased 53% and 39% respectively more than comparable properties not served by rail.***
– Arlington, Virginia’s overall transit-oriented plan has resulted in 40 million s.f. of development so far, while from 2002 to 2006, land values in the surrounding area grew 84%.****