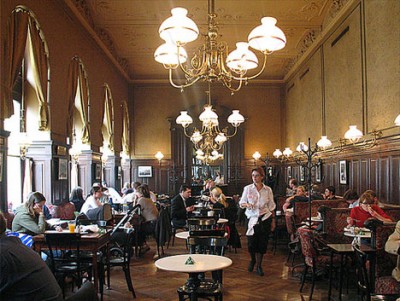 No, coffee culture did not originate from that corporate chain based in Seattle, but its history is indeed rooted in the ‘kaffeehaus’ of Austria, where it’s been a fixture of Vienna’s everyday life since the 17th century.

Like today’s coffeehouses in the U.S., Viennese coffee houses are meeting places not only for fresh brews, but also intellectuals, politicians, businesspeople. They’re famous for their laid-back atmosphere and the now familiar reputation as a third place.
“Let’s have a coffee” is a very common phrase, and it’s unique local venues are still the favorite place to be in spite of the Starbucks invasion.

How serious is the coffee culture in Vienna? Its history is part of the school curriculum. As the story goes, “a Polish man disguised himself as a Turk as Ottoman troops were invading Vienna in 1683. He became a spy for the city’s defenders and helped to liberate Vienna. As a reward he was offered the sacks of coffee beans left behind by the retreating Turks, and he became the city’s first ‘coffee boiler’.”

Thanks to Kevin Kawasaki for the reference!