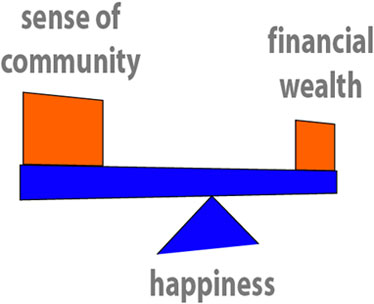 Balancing a sense of community vs. financial wealth isn’t a known inversely proportional correlation, but probably more so than you think.

Based on the recently published book, Deep Economy by Bill McKibben, here are some interesting perspectives:

– From a study measuring happiness, increases in incomes produce large hedonic gains in developing countries, small variable gains in Europe, and negative gains in the U.S., while companionship “yields more happiness in individualistic societies (like the U.S.) where it is scarce, than in collectivist societies (like China) where it is abundant.” Economist Richard Layard
– The richer you get, the more you tend to move to the suburbs, then to the exurbs, becoming more and more isolated.
– Many of us look upon our college years as the best years of our lives, when we were at our poorest and lived more closely and intensely as a community than at any other time.
– Local, indie restaurants/retail can’t compete with the leases national chains/franchises are able to pay, but they contribute much more to the local community.

What does this mean for cities and neighborhoods? People in the U.S. are increasingly more willing to open up their wallets for events and experiences that build community in a way that suits their contemporary needs (ie social networking amenities in buildings, MySpace, American Idol, cause-oriented happy hours, dodgeball leagues…) rather than the latest and greatest coffee maker, luxury car or stereo system.