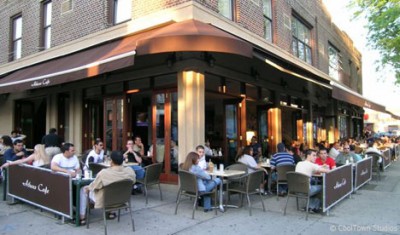 Are you on the ‘in’ or ‘out’ list? Are you with the times, or behind them? Are you considered socially conscious, or perceived as ignorant? Our status affects us more than we think. Many readers of this website who are at the forefront of improving their community are known as progressive thinkers, and they’d rather not be known as ‘old economy’. So let’s refer to that as their progressive status, which is often associated with the truly unique and the authentic, which is then associated with the most desirable local neighborhoods in the world.

Continuing our review of the (Still) Made Here trend from the previous entry, one of the most effective ways to measure how ‘progressive status’ is making people think ‘local’ is how good the story behind the subject is. Which ones tell a better story?

– Buying shirts from a sweatshop vs from a company that rescues ‘imperfect’ sheep destined for the slaughterhouse or hires only people from the country it sells it in?
– Working at a company where all the food in its cafe is grown within 150 miles vs one that has no idea, nor cares?
– Frequenting an indie restaurant where they sell a CD of only local musicians vs one which sells the same CDs in the same stores all across the country?
– Shopping in a downtown where you can’t find the same stores anywhere else in the world vs one where they’re exactly the same stores in 120 other cities?