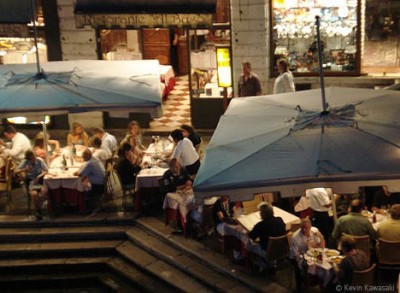 A major reason why developers find strip malls and office parks so enticing is that the tenants are predetermined, and thus are easier to finance because investors see the same predictability, which leads us to why 95% of development churns this out instead of the ‘good stuff’. Subdivisions and apartment towers are not far off, being marketed to as a mass audience who think and act the same.

So, in the same vein as what made YouTube, Wikipedia and American Idol drive millions to a passionate loyalty in a few years (if that), I’d like to provide the opportunity to do the same for five neighborhoods to show that 95% of the creative, progressive crowd is looking for something completely different, like maybe the outdoor dining scene above, or attainably-priced lofts.

I’ve been asked to speak on beta communities (groups of future tenants tied to a specific undeveloped/unrehabbed project) for the ULI in Las Vegas in October, and by that time I would live to present documentaries of five newly established pre-beta communities, all formed at the same time (now), that would like to partner with visionary developers to execute their vision.

So here’s the Beta Community Challenge:

If you present a start list of 20 creative, progressive people (in your city) that are committed to working with a developer to carry out their vision, I’ll help you set up a beta community at no charge until the event in October, including finding that developer. I can assist no more than five groups! You can find the four beta community types at CoolTown Beta Communities. The projects will then be tracked on this website so readers can keep up with how they’re progressing.