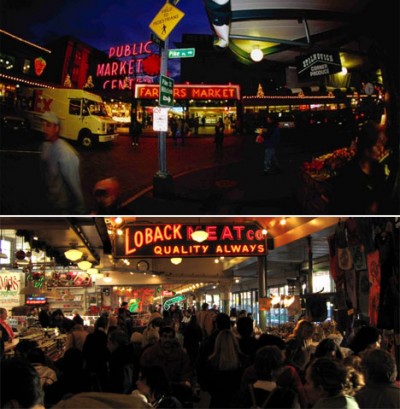 Why is that Seattle’s grungy Pike Place Market is celebrating its 100 year anniversary as the longest running public market in the U.S., while the beautiful new Portland Public Market couldn’t stay open for ten years even as public markets are flourishing?

Simple. Pike Place had a public partner in the city and is run as a nonprofit, while the Portland Public Market was completely private sector. Pike Place Market was founded by the city in 1907 after citizens who were tired of being taken advantage of middlemen demanded direct access to the producers. It was a success from day one. After a failed urban renewal attempt to raze the entire 9-acre market, the area was permanently protected as a historic preservation zone and the city established the nonprofit Pike Place Market Public Development Authority to run it, including apartments for 500 low-income residents/employees.

The result? Over 9 million people experience its 190 businesses, 120 farmers, 50 restaurants, and 240 street performers and musicians, as well as the famous flying fish at the Pike Place Fish Market. Of course, like any thriving destination, it has a regular slate of events: festivals, auctions, cooking demonstrations and its annual Sunset Supper, which is reminding of this outdoor dining scene in Sienna, Spain.