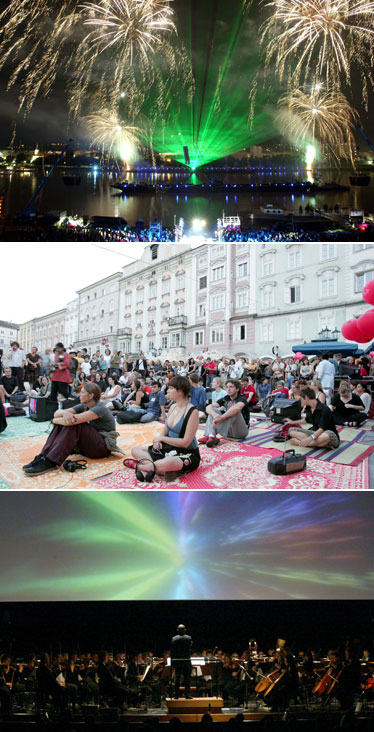 “This (Hatchfest) (profiled yesterday) looks really cool! But for us who don’t live in the states… do you know if there are any similar things going on in Europe?”

That would easily be the Ars Electronica Festival showcasing art and technology, which has had a major economic and cultural impact on its annual host city, Linz, Austria.

Not only was Linz a declining steel town that knew it had to transition to the information economy to survive, but the city’s leaders were committed to doing something about it way back in 1979 with the inception of the first Ars Electronica festival. That’s right, 1979. They knew they had to make an impact with a Wow factor from day one, and with the help of the media they accomplished that with The Cloud of Sound, a spectacular open air event with music, fireworks and lasers (remember, this is 1979) that attracted 100,000 people. Linz at the time had a population less than 200,000.

The organizers wanted to let the community know that they were participants, not just observers, and they succeeded in a big way. The city’s main square is the stage for many of the arts and technology events. By experiencing technology in a fun, playful way, it allowed city economic leaders to ease the fear of change in evolving from an industrial-dependent city to a technology-embracing one. The Ars Electronica Center (Museum of the Future, the leading museum of digital art and media art, allows the public to experience this year-round. The Ars Electronica Futurelab, a laboratory focused on developing artistic and technological innovations, benefits emerging businesses and provides the seeds for local economic development.

Hear more from the festival’s founder, Gerfried Stocker here on Smart City Radio. His key advice to cities is that it takes 5-10 years for such community-wide efforts to make a noticeable economic and cultural impact.