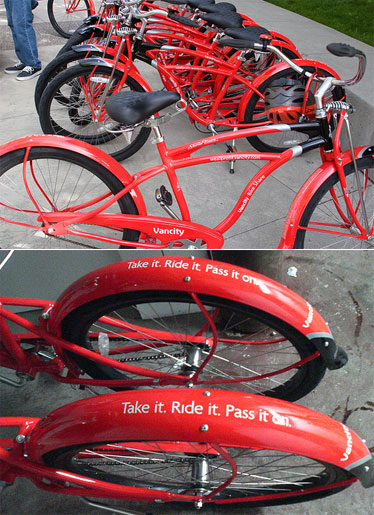 We know that companies often drive positive change much more effectively than government (especially in North America), such as what Whole Foods has done for organics. This has been just the opposite when it comes to transportation, pitting the private sector auto industry vs public sector mass transit. Is there any sign of a shift at all?

Possibly, starting with a simple, but noble gesture from a triple-bottom-line bank, Vancity, in Vancouver, Canada. After sponsoring a do-good website, aptly titled Change Everything (remember, this is a bank we’re talking about), they decided to take action themselves, establishing their own bike sharing program and contributing 45 new bikes to their home city. From June 27th to September 7, people will be allowed to use the bikes for three weeks before passing it on to someone else, ultimately returning the bikes back to the bank to be distributed to low-income families.

This isn’t nearly a long-term solution like that in Paris with their 10,000 bikes, but the notion of the private sector getting involved definitely is.