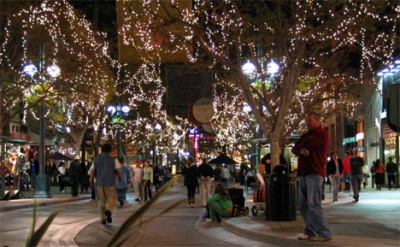 Pedestrian-only street. It’s the primary term used to describe a street for pedestrians only. Makes sense, but it’s clumsy and the acronym is even worse.

We need to reframe these terms. There’s been significant cultural and economic shifts in the last ten years, and thus there are countless words in our everyday lexicon that didn’t exist ten years ago (google, wiki, and increasingly crowdsourcing), and more so, words that have taken on a whole new significance, like ‘organic’ for instance.

Thus, from a city point of view, perhaps we should transition from defining streets and places from a car-oriented point of view (ie pedestrian-only, car-free). In the food industry, instead of pesticide free (ie car free) or naturally grown (ie pedestrian only) which implies that it’s competing with/giving up another market, the industry went with organic, and it’s done nothing short of significantly evolve supermarkets across the country, even Wal-Mart (and that’s saying something).

Living street – (link) Instead of pedestrian street.
Organic street – Ok, I just made this up when writing this post, but this would imply a street de-emphasizing cars, national chains (which are artificial transplants, not organically grown like people and local indie businesses), and emphasizing green buildings and of course, healther dining/food and health in general (ie yoga, fitness, spas).
Portal – Borrowing a web term, “presenting experiences from diverse sources in a unified way,” a pedestrian-only town center.

What’s your opinion? Comment below, or continue a threaded discussion here.