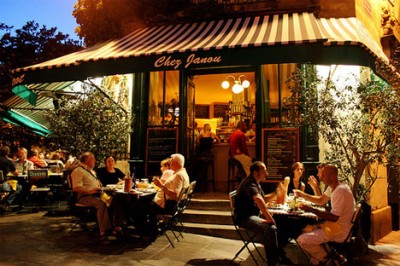 In continuing last week’s entries on redefining streets the way we’re redefining buildings (green), food (organic), and the music industry (crowdsourcing), here’s a sample of that shift on a city scale… a slow city, green city, city 2.0, organic city, remixed city, authentic city if you will.

Paris’ mayor vowed in 2001 to reduce car traffic/congestion by 40% by 2020. It’s the kind of thing auto-oriented generations see as a travesty of driving freedom (which ironically it’s anything but in the city). However, to emerging generations it’s viewed more as a 40% increase in pedestrian-oriented quality of life. Mayor Bloomberg tried his best in this regard with congestion pricing in Manhattan, but it may take another generation to implement.

So what’s happening in the cultural capital to reach this goal? Quite a bit, and what’s going on there probably inspires new generations of creatives rather than elicits sneers. Here’s a sample:

– The largest bike sharing system in the world, with 20,000 bikes by the end of 2007.
– Every bus stop has a status screen telling you how long your wait is – so you can slip in to that cafe to grab that last minute espresso.
– Large investments in what is already one of the best subway and tram systems in the world, where just $70/month will take you just about anywhere.
– For the greenies out there, diesel fuel is purposely set a lot lower than regular gas because it releases 30% less greenhouse gases. Not surprisingly, diesel cars are popular. Do government incentives like this work in the U.S.? Do you think it’s a coincidence that the Prius is the top selling car in California and that they get HOV status? :)
– Paris probably has more promenades, paseos and passages (ie pedestrian streets) filled with dining tables instead of cars, and fronted by local, indie cafes than most any other city.